Based in San Francisco, CA, MWE puts a modern and eclectic twist on Turkish and Balkan folk music. As a five member acoustic wind ensemble, MWE plays traditional and original songs with the rarely paired clarinet and the double-reeded zurna.  Add one more clarinet, a saxophone , and a davul (a shoulder slung marching drum), and you’re about the closest to heavy metal you can get without amplification.  MWE’s shows are loud, wild, and raucous affairs known for drawing entire audiences to their feet in one song or less.

The Mano Cherga Band ( Beodan Miric- vocals and guitar, Yevgeniy Sverdlik- upright bass, Alexander Goldshtrakh- accordion, Haluk Kecelioglu- violin and oud and Edwin Meares- drums ) started performing around the Bay Area nearly 8 years a go. The band’s repertoire consists of contemporary and traditional tunes from Ex Yugoslavia, stressing mostly on the “Romani King”- Saban Bajramovic, then Goran Bregovic, Tozovac along the Hungarian, Vallachian, Macedonian, Croatian and Greek popular tunes as well, singing on more then 6 languages. Along the popular “covers”,  the band plays their original songs. Besides the obvious Balkan soulful feel and energy, unintentionally, yet obviously, Mano Cherga flirts with the popular styles and genres such as: Jump Blues and Swing from the 40’s, the 50’s Rock’n Roll and Chicago blues, British invasion, Surf and Skiffle from the 60’s, the 70’s funk and punk, 80’s and 90’s rock and metal etc. The band focuses on the theatrical, live performance representing the Serbian club scene and wedding euphoria by presenting the upbeat, steamy tempos and hypnotic Balkan rhythms along the catchy melodies and fierce violin, guitar and oud solos. Special guest for the June’s BBB is Balder ten Cate, who will join Mano Cherga on the accordion.

Back to the Bacchanal in a new iteration, we welcome back the potent creativity and beautiful harmonies of Aya Tano Band! Aya Davidson and Tano Brock are a Bay Area based duo of young musicians that perform Albanian, Greek, and Romani music. They started building their repertoire together during their travels through Eastern Europe in 2015. They will be joined onstage for this performance with Dan Cantrell on Accordion and Sean Tergis on Drums.

producer, multi-instrumentalist, singer-songwriter, and performer. Brought up in a traveling musical family, Tano was introduced to the world of music at a young age. His first instrument was the “doumbek” (a Middle Eastern drum) which he started at age 6. He started studying piano at age 7, and at age 12 began teaching himself guitar. At age 13 he taught himself how to digitally record and produce music, which began his career as a composer/producer. He then continued to expand his array of instruments, adding saxophone/clarinet at age 13, bass and oud at 16, and laouto at 18.
Website | Facebook Page 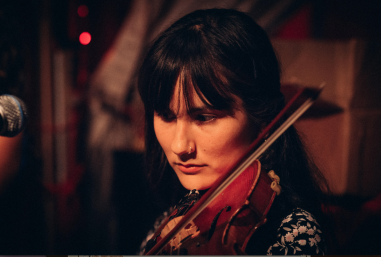 Aya Safiya (Vocals & Violin) was born in into a richly musical household and intercultural community. She grew up constantly embraced by multi-cultural music, including music from: Egypt, Spain, Turkey, India, Japan, Brazil, Cuba and beyond. Growing up, she was especially involved with Greek culture. Over the years she built up her traditional Greek repertoire and polished her Greek styling. Now, while continuing to deepen her understanding of Greek music, she is studiously revisiting traditional musics from all over the world, as well as composing originals in the styles of Pop and Electro-acoustic. She is native to and currently resides in the Bay Area.
Website | Facebook Page

Watch Video of Aya and Tano Band live in their previous set at the Berkeley Balkan Bacchanal.