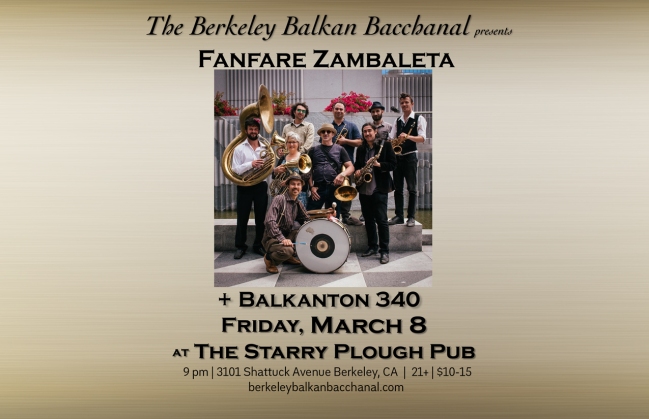 The Berkeley Balkan Bacchanal presents a new rotation of bands the Starry Plough Pub on the second Friday of every month. Berkeley Balkan Bacchanal is a concert series featuring the other-worldy talent of musicians from the Bay Area and beyond performing Eastern European folk music. A hub in the Bay Area Balkan music scene, the bacchanal provides a platform for a community of performers, folk dancers, regular attendants and new friends to revel together every month since 2011.

Fanfare Zambaleta was incubated in the Zambaleta Music and Dance School in San Francisco and has since hit the streets as a full-fledged 11 piece juggernaut of a band playing exciting Romani, Serbian, Macedonian, and Greek Brass music with passion and dedication and featuring some of the Bay Area’s most exciting young players and seasoned veterans.

Balkanton 340 brings you the unique traditional sounds of the folk instruments gaida, gadulka, kaval and tupan played by the Bay Area’s most exciting veterans of Bulgarian music.