The Berkeley Balkan Bacchanal presents a new rotation of bands the Starry Plough Pub on the second Friday of every month. Berkeley Balkan Bacchanal is a concert series featuring the other-worldy talent of musicians from the Bay Area and beyond performing Eastern European folk music. A hub in the Bay Area Balkan music scene, the bacchanal provides a platform for a community of performers, folk dancers, regular attendants and new friends to revel together every month since 2011.

Alex Hand graduated from the University of Nevada, Reno’s jazz program in 2011 with a bachelor’s in guitar performance. After touring the country and beyond with west coast bands from Portland and Los Angeles, including LA-based French swing singer, Jessica Fichot, Alex has been living in the San Francisco area for five years teaching and performing. The Alex Hand Band released their debut album, Traders of the Lost Arts, in 2018 of traditional dance music from Eastern Europe arranged for a guitar-led jazz ensemble. Alex has performed for the Midwest Gypsy Swing festival, and Montreal’s Francofolies festival. AHB is working on their second album of Eastern European folk jazz, due in summer 2019, and will feature Chris Trinidad on bass and Isaac Schwartz on drums. Be sure to catch their last Bay Area performance before Alex moves to Texas for grad school in June!

The group’s intention is to popularize Georgian culture and art in the United States and become a cultural bridge between Georgia and the United States. In Georgia, the special love to the land and harvest is preserved by generations and is expressed through ancient customs, architecture, fine and folk art, poetry, folk singing called polyphony and unique dance tradition. 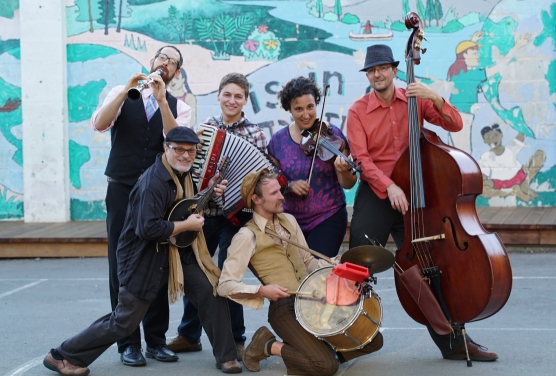 Saul Goodman’s Klezmer Band comes from a musical tradition tracing back to the old world shtetl of Szrensk. Incorporating post-immigrant sounds rooted in klezmer, Saul Goodman’s music moves the spirit and the dance. It’s always a simcha with Saul!

We’ll be debuting some new compositions, as well as some old gems dusted off from Beregovski and Kostakowski collections. And we’ll feature special guest percussionists on xylophone and drum kit.